Greetings to all from my neck of the woods, where I seem to have disappeared for a little while.  I've not been completely gone - just keeping myself scarce for no particular reason other than not really having much to report.

In my last blog entry, I mentioned that bathroom renovations were underway.  Those renovations have since been completed.  It took a few more days to return my sleep cycle from WAY abnormal back to simply screwed up.  If you're me, there's never going to be a normal.  I'm even more convinced of this, as lately I'm able to fall asleep, but not able to STAY asleep for more than three hours at a time.  Example...I get myself nice and tired, crash at 2 or 2:30 in the morning, fall asleep until 4am...then it takes me two more hours to fall back asleep.

I don't know what gives.  I really don't.  Brain is silent, I'm DEFINITELY tired - the deep sleep just refuses to take over.  They say you sleep less when you get older - I HOPE that's not true as I'm already functional with four to five hours per night - at this rate, I'll be pulling all nighters and chugging the coffee to stay awake in the mornings!  (Yes, I bought more caffeinated K-cups!)

I recently undertook another project.  The re-organizing and deep-clean of my daughter's room.  After two years of her destroying her room piece by piece (when it comes to such thing, my soon-to-be-13-year-old has some serious talent) she's decided that she's outgrown her twin-sized bed and has asked for a full-size upgrade.  I obliged, but told her that if she was going to be pulling out the twin-size bed, she was also going to be pulling up the carpet that she's gotten slime stains on.  She's proven time and time again that her room cannot be where she stores her art supplies, even though that's where they always end up when my back is turned.

Anyway, I waited until she was in school before starting her room.   There's NO other way to avoid the, 'Ma, I was saving this,' or the 'I didn't want to throw that away!!!' Three or four trash bags went out - bags that were filled with more than the 'candy wrappers' and 'water bottles' that she had littered all over her floor, what I told her was in those trash bags.  I managed to get rid of things I'd not seen her touch in years - since we MOVED.  What's the sense in keeping it all?  Some was donated, some just plain trashed.  Got rid of clothes too that were six or seven sizes too small.

Oompa's the one who bought her the bed frame and mattress, but I was left in charge of not only prepping her room for the new bed, but also of picking up the mattress from town.  At first, I thought it would be easy but when is anything that simple?  Apparently the Jeep I wanted (and still love, by the way) has one of those pesky antennas on top - meaning I couldn't put the mattress on the roof of my Compass.  So, a U-Haul was rented for Friday morning and both J and the son were on board to help me transport a full-size mattress from the store to home - then we would transport her old twin-sized bed with an accompanying built in shelf and dresser over to the wasband's for her little sister to use.

Friday morning, we got up early, finished up the rest of her room (swept the floor, stored boxes underneath the bed frame (ordered from Amazon and assembled the day before) and were about to head out.  The Son was, as usual, taking his time, so I knocked on his door and said, "we'll be waiting outside, meet us out there and lock the door on your way out!"

He shouted something back.  "Okay!" I'm guessing he said.

I waited another couple minutes and realized there was a bag of garbage that was still sitting in the hallway outside the daughter's room.  I grabbed the bag and went to trash it.  Went to go back into the house and walked right into the Son, who NEVER LISTENS TO ME.  Except for today.  He chose to listen to me today, and had already locked the door on his way out.  My pocketbook and my keys and my receipt from the Mattress store were ALL in the house.

We checked the front door in the event that the son hadn't locked it.  He had.  Nice and tight.  We checked J's car for HER key - it wasn't there - it was also in the house, tucked away in her work bag.  As a last resort, I jogged across the street to the neighbor's house - she takes care of our animals whenever we're away and has one of our spare keys - and she wasn't home.

J started trying other doors.  Kitchen sliders?  Locked.  Side entrance?  Locked also. I'm starting to panic because we have a 12:00 appointment to go pick up the U-Haul, and four hours to get everything brought to wherever it needed to be - and return the U-Haul.  And everything I needed was locked inside the house!

I walked along the side of the house and tried the windows.  The ONLY one that was unlocked and willing to budge was the bathroom window.

She came over.  I showed her that glimmer of hope - the open bathroom window.  Next, I tried to maneuver myself into a sitting position so that I could easily slide into the bathroom window.  To explain, I have a bi-level.  When you open my front door, there are stairs leading up and stairs leading down.  So the window was located pretty much close to the ground from the outside - to go in would mean a drop down into the room from above.  It had rained the night before, and I wasn't wanting to soak myself on the wet mulch.  Plus, I'm 40 years old now, no longer a spring chicken.  Trying to limbo myself into the bathroom window wasn't working - not from this angle.  I'd more likely break my back trying to bend in ways I'm no longer able to.  Not to mention there wasn't a whole lot of room - picture below will show that trying to go in feet-first would probably have ended very badly, given my busty frame...

"Okay.  I'm going in headfirst."  My brilliant idea for the day.

So - in I go, slowly.  Used my hands to 'walk' myself down, (pushed toilet seat down first) and then little by little, shimmied my way down until I was literally hanging onto the outside ledge using my feet.  At this point, J decided to take a photo - promising that this would bring forth years of amusement whenever talked about in the future.  And I'm sure it will...

Dropped down into the bathroom, using my arms to catch myself.  By now, the drop wasn't a large one, and the toilet broke the fall up, some.  I'm in.  And I'm alive.  Go, me!

Damn, though, I think I pulled about six different muscles trying to break back into my own house.  This very same photo was posted onto social media with the caption, "how's YOUR day going?'  Oompa's response was, "what happened?"  I explained the situation to her and the first thing she said was, "I hope you didn't break anything in your new bathroom!"

No, Ma.  Maybe just a little bit of myself, but thank you for the concern. 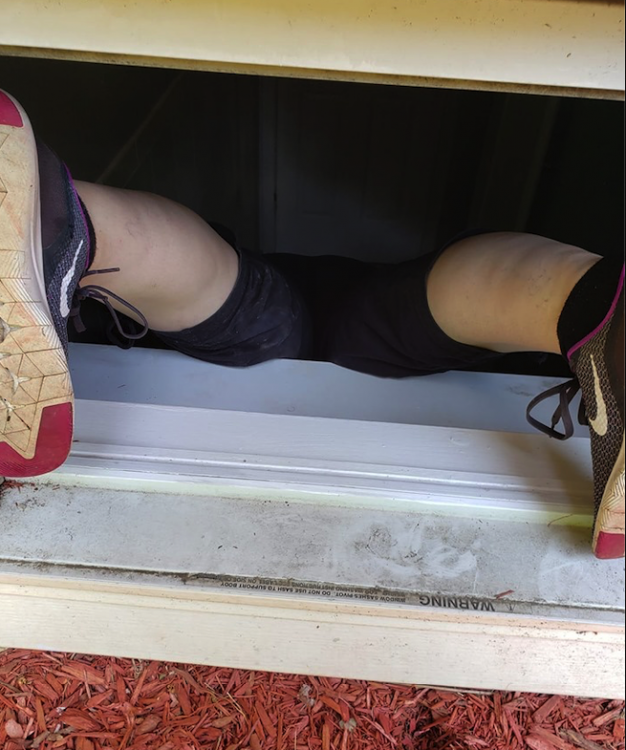 Got to the U-Haul with minutes to spare - got everything else we needed to do - done.  Aside from this little lock-out snafu, the day was a good one.  I have a few bruises and was sore in places I didn't know existed yesterday, but end result - the daughter's room is looking clean and organized.  Now the challenge remains - getting her to KEEP it that way!

So, in closing, I would like to thank my son for, on Thursday night, taking a shit in the downstairs bathroom - a shit that smelled SO badly, that I cracked the window to air out the room.  Had that shit not been taken, I would probably STILL be trying to figure out how to break into my own house.  Furthermore, I'm grateful for my own absentmindedness - normally I would have remembered to close and lock that bathroom window once the stench had died down.  Perhaps there IS a silver lining to my increased ability to not sleep?????