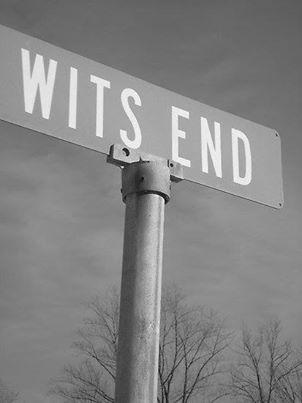 How do people do it? I cannot ask the right question to save my life. Maybe because I don't like pointed questions.. so I don't ask any? Of course everyone else loves asking the right questions. Sometimes, yes, I need that one person... that when I say, "I'm fine." They look at me in the eye and call, "Bull." But there's been waaay too much of that lately.

I'm reclusive. I barely go out. I've skipped school and such so I don't have to deal with more than I can. I'm expert at dodging people, keeping them at arm's length and even pushing them away if they get too close. And it worked for a while. Now that's not working. Even people I've done that are trying to hang out with me. It's to a point I do not have a moment alone. I used to.... okay.

At school I used to be alone on break. For a whole 11 weeks on break I'd go of course find coffee or something. Ever since I've been sober coffee has been my thing. Ditch one addiction, gain another. Then I'd park my hide behind a building and I'd call one of three people. The only three people until recently I'd ever call just to have someone to talk to in the last eleven years. I got friendly with a total of three people in classes (helps to have a vague sense of friendship to know if they'd be good at group projects) and cordial with four others that are D's friends. That's how it worked all quarter and I LOVED it. I'm social and perfectly capable of it. I just choose not to.

New quarter starts just as the last one had. One this time D's friends are inviting me everywhere and starting to wonder after me declining all the time. The three friends I made last quarter are in my classes again and now following me around at break.. to the point what the frag. Seriously. I could find some oddball corner and suddenly one of them will appear and want to sit with me most the break. So, then I cannot call anyone because I don't want to talk about things with people around... hence the odd corner. I could hang out in my car they'd find me. I could go to any of the restaurants, gas stations, or stores anywhere in vicinity and it is hard NOT to run into one of them. I could even go crawl into the bathroom and eventually some one is going to notice. It's like they have me on gps. It's rather annoying.

Recently I had a complete meltdown and two of the four friends of D's noticed. Do you know how hard it was to lock that up from him? Don't get on my case about how I should tell him. I don't have to tell anyone shit. And worse one of them likes my personality.... likes and in the first stages of in love.. only I dangle so it's not going to work. Not that I'd want it to. I just hate it when people love me and care about me. I am a sociopath. Morality is meaningless and pointless to me. However, I don't like hurting people. It's not morals. I just am a sucker. I got that annoying white knight complex. And even that isn't wholly fair. A damsel in distress I'll ride to her aid and manage to at least make her smile. A guy.. well it's kind of awkward. I don't understand why. I'm gay. You'd think I'd have the white knight complex. And don't you dare fragging go there with me being the damsel in that situation. Don't. Just don't go there. I'm a guy! I might be in duress, but I'm still a man. Why is that so hard for people to see?

How do I deal with it?

I get it. I'm likable. It's fraggin annoying. I don't want to be liked. Part of me doesn't really think I deserve it. They don't know what I've done and even when I tell them they accept it. I thought I was the sociopath. Seriously. I can bury it deep in whomever I want... single, married, prostitute... no one really cares about any of that. They actually worry more about me. What about the relationships I've destroyed?. The family I've broken apart? What about the prostitute? I'm sure she's got some sap story. I doubt she's always dreamed about selling her body. What about the time I've crossed lines? I'm living with a guy and playing parent to his kids.. same guy I've buried it deep in his girlfriend while they were together and not just once or a phase. Nope. And she's the mother to those kids. And he not just forgives me but allows me to bury it deep in him too. Shockingly she's totally okay with me "taking her place." I mean... what? What is wrong with people? Seriously... if he started seeing his ex I'm pretty certain I'd be bitter about it. Yeah, I don't work fair. And ALL of this makes people worry MORE about me rather than less. What? WHAT?! Which means they like me more... how does that work?

The only time this ever becomes an issue is when there is a pregnancy and it's unclear who the father might be. Everyone looks at me. I don't even have to sleep with her and I'm accused like it HAS to be my fault. And people hate me for a while. But then eventually they get over it and it's back to as it was before... and weirdly they trust me more if I hadn't touched her. If I hadn't slept with her it's because she didn't want to or the opportunity didn't strike. I could actually be alone with someone and nothing happen. I'm annoyingly defensive when nothing actually happens too. If I don't defend myself that's when it becomes a worry. I won't defend my actions. No point. So, I buried it deep in someone's wife. Yeah, that takes a special kind of.... yeah. Yet, I'm expected to say something for myself. What? You tell me. I don't know. I have issues.

The only thing is I'm not in love with any of them. I've been in love with D since I was sixteen! That has not changed in all this time. I haven't loved anyone the way I love him. I know I got a real nice way of showing that. So, it's not going to be a full blown affair. I know I kind of suggested it. But I actually didn't get with D until LONG after his ex and he split up. SEVERAL years after the fact. I'm annoyingly honest about shit like that.

So, somehow that makes it right in peoples eyes?

Hate me please. It's easier for me. I don't know how to deal with everyone liking me and wanting to help me.