To whom it may concern,

I am sure I have mentioned this before but I want to re-examine what's going on and write it all down. Seven years. It has been seven years since it happened. Since he hurt me. It's actually going to be eight years this year.

I read a post a few months ago that said;

Today in science class, I learned every cell in our entire body is replaced every seven years. How lovely it is to know, one day I will have a body you will never have touched.

I found that poetic seeing as my seven year...anniversary of sorts would be coming up quite soon. When it finally had..I thought I would feel relief. I thought I would feel better. I thought my body would have been cleansed in some way. Like he had never done what he did. But that was when I realized, he hadn't just hurt me physically, he had scared me...ruined me...mentally as well. I realized he had a hold on me that no amount of dead cells could change. He had taken away my sense of safety, intimacy, my sense of beauty in the world. He had made me into the pessimistic asshole I am today.

Today, no matter how stupid it sounds, I have decided that I won't let him win. I will smile. I will laugh. I will find love. I will have kids. I will have create a life for myself that he will never be able to ruin. He will never ruin me again. 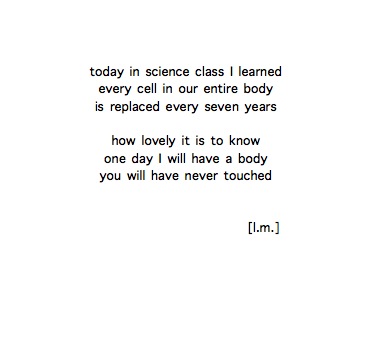